The BabyGT also known as the LaminR was my take on a hyper economy touring and commuter vehicle for high milers. It was built as a chassis in 2001 as a full size mock up in my fifth floor flat (!) and stood there for five years half finished (!) - much to the amusement of flatmates and visitors.

It was proposed to be powered by the one stroke engine at the rear wheels and an electric motor at the front wheels.

Given in 2002, VW and some minor players announced they were also pursuing similar vehicles I decided to focus more on the one stroke engine, as the engine could have / can change the way ships, trucks, trains and all vehicles are powered. Had anticipated the VW et al would be ”out soon”. 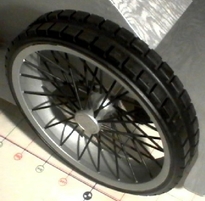 It took VW twelve years and three revisions to take their concept forwards to the XL1 and now it has only a limited production run and costs @€100,000 which is fairly ridiculous - inexplicably and unnecessarily using unobtanium in the construction.

The Baby GT would cost around €15,000 / $20,000 having fairly simple aluminium and GRP construction - aside from the carbon spoked wheels - necessary to keep ride  effective in a 440kg vehicle.

It was described to Volvo cars advanced design department in 2002 but they ddeclined.  In 2004 Volvo presented the 3CC concept.

The Baby GT chassis and wheels are still in my attic - one day! :)